The Catalan region is the northeast region of Spain which has ever changing landscapes and like its natives is both enduring and charming. From the architecture of Gaudi to the beauty of the Pyrenees it seems to have it all. And Barcelona being the capital of the region hogs all the limelight of course!!!

Therefore if you are visiting Catalonia and in mood for a visual feast, want to surrender yourself into a city’s charm then the choice of city has to be BARCELONA.  The whole city is filled with narrow alleys, grand boulevards and therefore putting up a very elegant and modern outlook while retaining its old town charm. Our first day of sightseeing started off with the Montjuic Castle and magic fountain. Standing on a vantage point, Montjuïc Castle offers stunning views of the city. Now a peaceable place, the memory of this fortress stands in Barcelona as a symbol of repression but also of the city’s struggles during different periods in its history. Watching the musical fountain display was quite a delight.

Now the one thing that Barcelona is famous for is Antoni Gaudi and his unusual sense of architecture. We didn’t quite know about him before coming to Barcelona so we started off with the Hop on hop off bus tours with the first stop at Barcelona’s most famous landmark La Sagrada Familia. The basilica remains unfinished after 134 years of construction with Gaudi dying after completing only 25% of its construction. During the Spanish Civil war the initial designs were burnt but the construction of the basilica continues and some of the designs which were saved were left to the interpretation of the current architects. A full circle of the exterior shows you tall spires, stunning carvings and delicate additions of bright colours. It is definitely a must see in Barcelona.

Our next stop was Park Güell, a system of parks and architectural delights which was designed by Gaudi for the entrepreneur Eusebio Guell (hence the name). The park encloses spectacular stone structures, detailed tiling and interesting buildings, becoming Barcelona’s most unusual public park. Once you reach the top of the Park you will find a peaceful terraced area overlooking the city from where you can get wonderful views of the city. You will also find beautifully tiled mosaic seats and a remarkable dragon fountain which captivates the attention of the passer-by. After spending a couple of hours we were off to explore more Gaudi architecture. 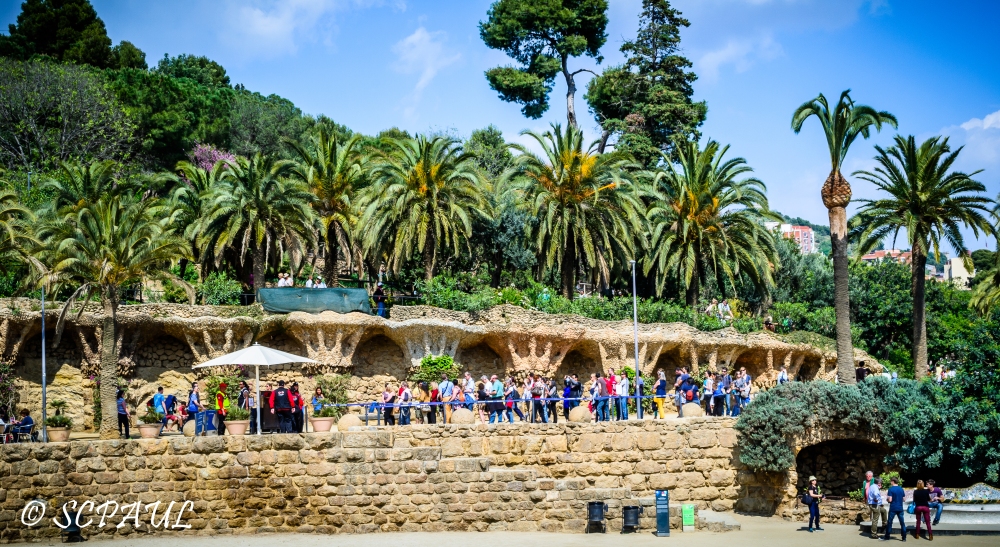 Casa Batlló and Casa Milà were the two Gaudi buildings on our list. The roof of Casa Batlló resembles the back of a dragon. Its vibrant exterior displays colourful mosaic made from broken ceramic tiles, while bone-like adornments surround its windows and for obvious reasons, it is commonly called The House of Bones. Just a few blocks from this building was Casa Milà built by Gaudi in the early 1900’s and is listed as an UNESCO world heritage site. Completing all the Gaudi show stoppers we finally decided to head off to the beach. 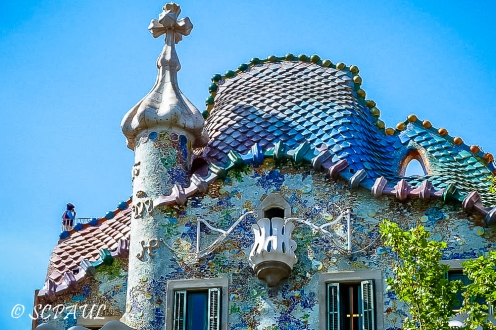 Now a visit to Barcelona can be deemed as incomplete without going to Las Ramblas. So off we were the next day exploring the city’s iconic street, teeming with flower and fruit stalls, souvenir shops, cartoon artists, street performers as well as street hawkers, pick pockets and (by night) prostitutes. It is constantly jam packed with people at almost any hour of the day. A walk down this chaotic street is sure to give you a sensory overload and is good starting place to venture deeper into the Gothic quarter. Having finished our bits of shopping we jumped on to a Hop on Hop Off tours to sightsee further bits of the city which were beyond walking. 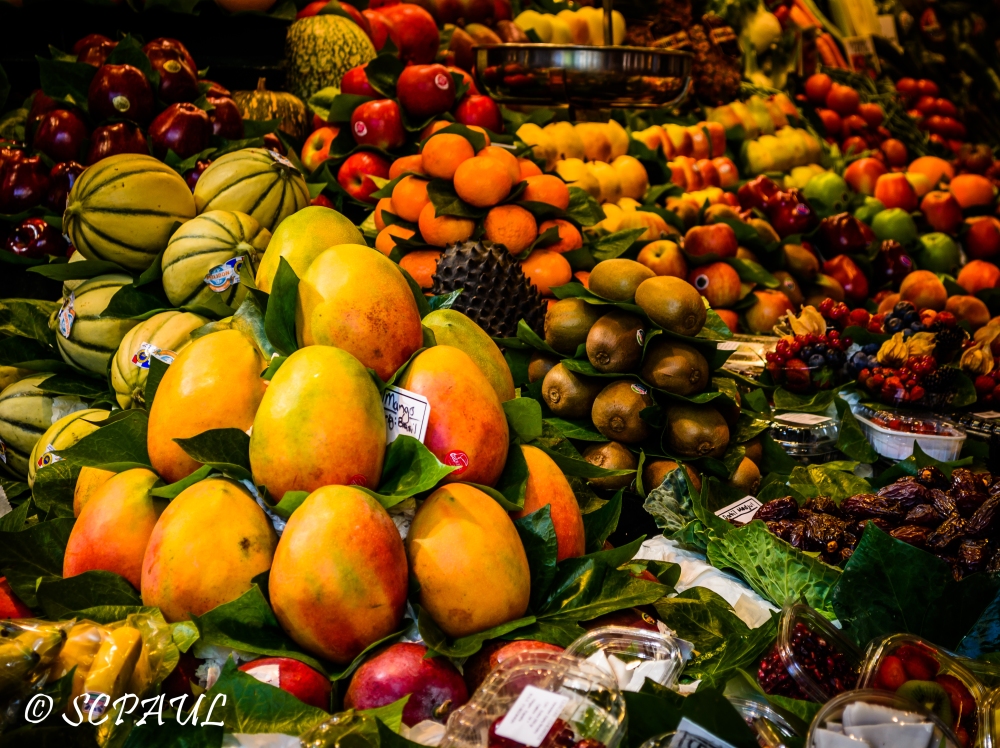 Another activity that was definitely on our to do list was a flamenco show.  We chose to go for a show at the Palau de la Música. It is an architectural jewel of the Catalan Art Nouveau and represents an essential landmark in the cultural and social life of Catalonia. In order to get an unique experience we picked a show called Ópera y Flamenco. A unique blend of Opera and Flamenco for those who want to see this dance and music played at the highest level. Since 2004 it has become one of the most watched flamenco shows in Barcelona. 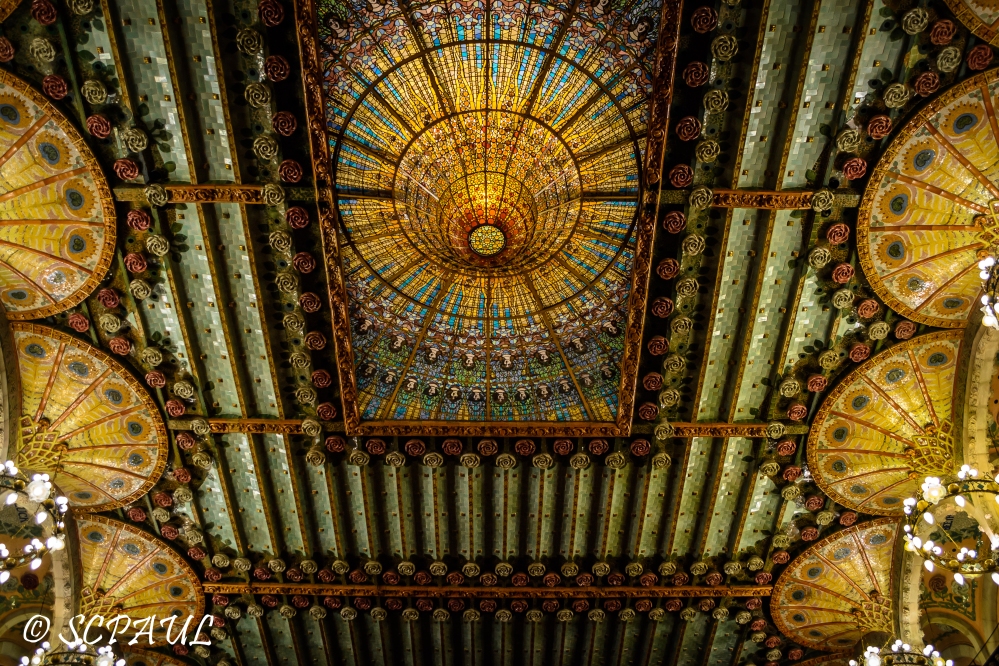 Although Barcelona is full of stunning architecture and has got lots to do but there are plenty of fantastic day trip destinations, such as along the coast to the nearby seaside town Costa Brava. However since we were in mood for a bit of mountain air, we took the road to Montserrat, for its visually stunning landscapes, and a spectacular Monastery.

Montserrat means ‘serrated mountain’. Looking at the photos of Montserrat and its multitude of rock formations, one can understand why the mountain has this name with many jagged peaks and unique rock formations. A visit to the Monastery at Montserrat is sure to be a memorable experience as you get to learn about Black Madonna and about the intriguing history of the region. Inside the monastery while the actual statue is behind glass, one of her hands is uncovered for you to touch upon your visit. It is traditional to touch the hand of the Black Madonna, whether you may consider it a religious experience or not. The moment we shared with her was powerful and captivating in such an atmosphere. We were also lucky enough to listen to L’Esconalia, the Montserrat Boys Choir, with their beautiful voices singing the midday Salve. It was truly an amazing and blessed experience. Apart from the Monastery one can also go hiking on the mountains with various paths clearly marked. Regardless of which ever path you choose there are breath taking views in every direction.

One of the great pleasures of visiting Spain is drinking Cava, a sparkling white wine, the Champagne of Spain. And while Cava is produced through-out Spain, the best Cava comes from the Codorniu Vineyards in Catalonia. It’s the oldest and second-largest producer of bottle-fermented sparkling wine. Thus after spending half a day at Montserrat we decided to head off to the Codorniu Vineyards. The walk of the vineyards leads you to their grand museum and wine cellar where they have exhibits of the traditional grape presses and fermentation machinery throughout the years. The most interesting thing we found is caves to store the millions of bottles. In Codorniu they didn’t have natural caves like they do in the Champagne area (France), so they dug them. I mean, 30 miles of tunnels three stories deep. The tour takes place in an electric train and sight of a wall of bottles stretching a quarter of a mile away is unbelievable. At the end of our tour we also got to taste the cava which was made the winery.

And so came to an end, our 4 day break in Barcelona before moving on to the South. We totally fell in love with the city where we experienced a very colourful, spirited and unique architecture and where the locals join hands and dance the in front of the cathedral every weekend. Neighbourhood festivals jam the calendar and every hidden lane provides a collection of fascinating shops. Once again if you want to surrender yourself to a city’s charms let that city be BARCELONA….

Have you been to Barcelona, share your views with us below..